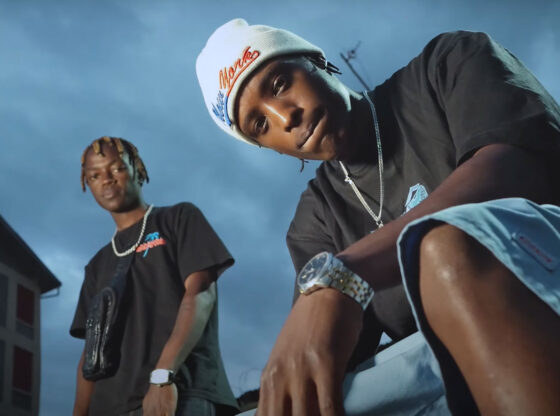 Buruklyn Boyz were the third most-streamed Kenyan artists on Spotify in 2022, behind Afro-pop group Sauti Sol in first and hip hop/Kenyan drill group Wakadinali who placed second. But who are Buruklyn Boyz? In this article, Loud.co.ke breaks down everything you should know about one of the hottest drill crews in Kenya and Africa today, captivating fans with their music, fashion and their repping of urban culture from Nairobi, Kenya and the Buru Buru neighborhood they hail from.

Buruklyn Boyz is a musical group based in Nairobi, Kenya performing hip hop and Kenyan Drill. They hail from Buru Buru, a middle-class neighborhood in Nairobi.

Buruklyn Boyz is made up of rap duo Mr. Right and Ajay, as well as several other rappers such as Younglouie58 and Luiz, producers, designers, videographers and executives such as their manager Mr. Brown. Most members of the group are childhood friends of Ajay and Mr. Right and all grew up in Buru Buru.

In their music and videos, Buruklyn Boyz are often heard referencing Tano Nane, Swahili for ‘five-eight’ (5-8). 58 is the route number used by matatus (Public Service Vehicles) in Nairobi plying the Buru Buru route, and Tano Nane is therefore simply a phrase they use to pay homage to the place they grew up in.

Mr. Right was born in 1999. As for Ajay, Loud.co.ke is yet to confirm his age but will update this article once we’ve managed to do so.

Ajay and Mr. Right were always passionate about music and enjoyed freestyling, and started buzzing right after they finished high school in 2019. At the time, they were primarily Shrap rappers. Shrap is a Kenyan slang (sheng’) and trap fusion sound popularized by artists such as Boutross. Buruklyn Boyz started buzzing with the late 2019 release of Durag na Slice, a catchy Shrap single in which they showcased their flows, love for fashion and group camraderie that would characterize their later success.

They followed it up with more buzzing rap singles such as Walevi, Kalamu and Tano Nane that earned them their early following. However, it wasn’t until they switched their style up to become one of the pioneers of Kenyan Drill that they found mainstream music success. The break-out single that thrust them into the limelight, drill single Nairobi, was released in 2021.

Nairobi put them on the map, as fans wondered who these guys with covered up faces, crip gang imagery, an aggressive new sound and smart, witty lyrical flows were. They would prove that they were here to stay as in the months after Nairobi’s success, they released several successful singles and features such as Wild, Last Air Bender, No Signal and Pree (scroll on for videos).

They also released their debut album, East Mpaka London, in which they explore various themes including love, success and reflection on their journey so far.

East Mpaka London is the debut studio album by Kenyan drill group Buruklyn Boyz. It is a 15-track album with popular singles on the record including Catalyst, Last Air Bender and Pree. It was released on May 20th, 2022.

Buruklyn Boyz are part of a class of rappers pioneering the Drill sound in Kenya. Drill originated in Chicago in the early 2010’s with the likes of Chief Keef, before taking on a new life (and sound) in the UK before being exported across the world. In Africa, Kenya, Nigeria and Ghana are among countries with growing drill scenes.

Buruklyn Boyz, Wakadinali, Natty and GTA are only a few examples of Kenyan artists who continue to pioneer the genre and amass fans. The growing relevance of Kenyan Drill was clear when Spotify Data for 2022 disclosed that two of the three most streamed Kenyan artists were drill groups – Wakadinali and Buruklyn Boyz, who trailed Afro-pop stars Sauti Sol but were listened to more than the likes of mainstream pop and RnB stars Otile Brown and Nyashinski.

With tens of thousands of downloads and streams, mix series such as Loud.co.ke‘s Ultimate Kenyan Drill Mix – Kenya’s favorite Drill mix – have also helped popularize the genre. In fact, the latest edition of the series with DJ Steve254 features the best compilation of new Buruklyn Boyz music and their features in 2022 – and you can stream or download it for free. Previous editions of Ultimate Kenyan Drill have highlighted other artists including Wakadinali and GTA. Check them out too!

You can purchase Buruklyn Boyz merchandise including t-shirts and track-suits by placing an order on their online store.

Tweet
Share
Share
Pin
0 Shares
World Cup Special Mix: The Wake Up Call With Grauchi #97
The Incredible True Story Behind Barricade’s Comeback ‘Streets Can Have Me’