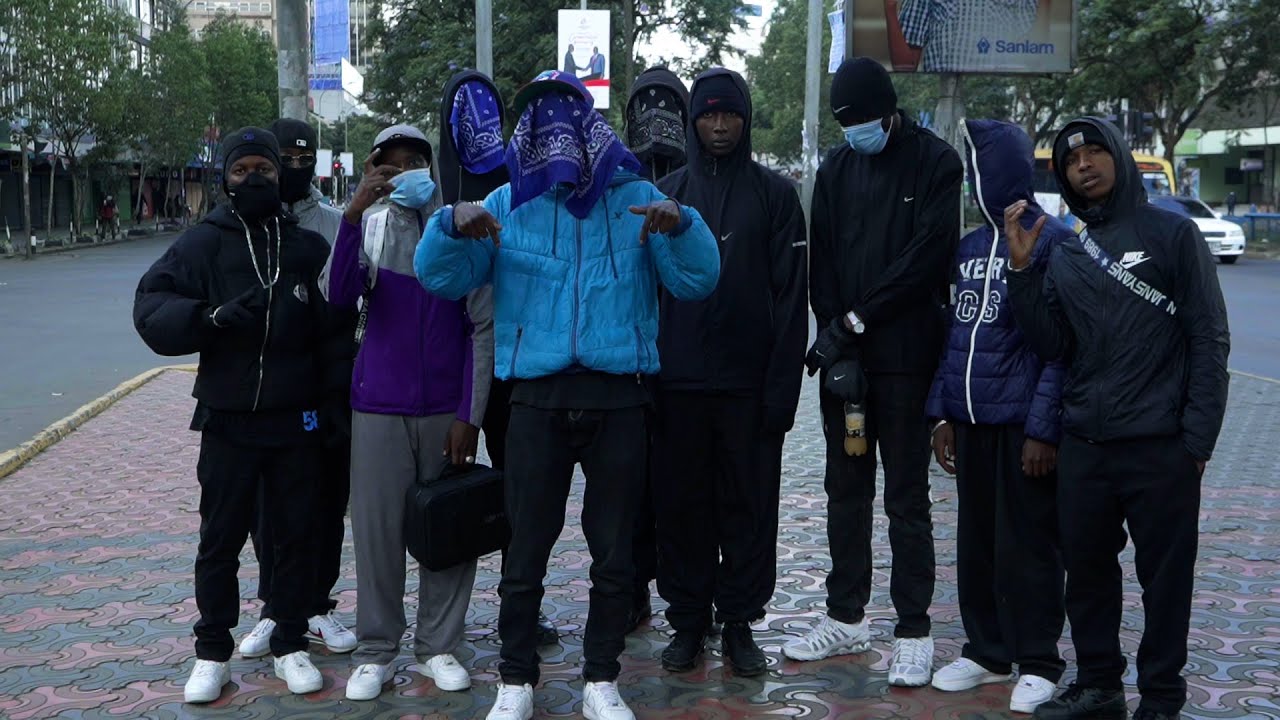 Buruklyn Boyz is a fast-rising drill collective from Buruburu, Nairobi.

The group is affiliated with numerous other creatives including artists, producers, videographers and more.

Buruklyn Boyz proudly represent the neighborhood they hail from, Buruburu, with the Tano Nane (58) tag heard across their catalogue.

They are also affiliated with the Crips gang. Their visuals include heavy Crip imagery including blue bandanas and attire.

Buruklyn Boys are among the leading drill artists in Nairobi. Their biggest hits so far include Nairobi, Durag na Slice, Walevi and Billie Jean.

Drill, a hip-hop subgenre, has found global prominence in the past decade and is taking root in Kenya thanks to artists such as Buruklyn Boyz and Wakadinali.

Wakadinali, the celebrated rap group, released their fourth full length project in 2020, Victims of Madness. It was their first pure drill album, representing the growth of the genre locally.

Buruklyn Boyz are one of the hottest drill groups thanks to a series of consistent releases in the past year that have shaken up the game.

Durag na Slice was one of their early releases which caught the attention of many rap fans in Nairobi. It quickly became a cult classic.

Since then, Mr. Right and Ajay have gone on to build up a loyal fan-base that is growing with each passing day.

Their latest single, Nairobi, looks set to become their biggest hit yet. Expect it to be the first of many.

The cold visuals compliment an unapologetic flow as Buruklyn Boyz declare their intentions to take over the scene in kenya.

While it is sure to catapult their career to new heights, it is only the latest in a series of recent bangers, some of which might even be called classics.

Mr. Right and Ajay wowed audiences in 2020 with a range of exciting, authentic bangers.

From lyrical flows on Kalamu to vibes and party tunes such as Walevi, the group proved that they can do it all.

Mr. Right, in particular, has become a fan favorite thanks to a slew of releases and impeccable rhymes.

2021 looks like it’s going to be a massive year for Kenyan hip-hop, including shrap, trap and drill.

While Gengetone has been the popular genre in recent years, hip-hop is witnessing a renaissance thanks to the likes of Wakadinali, TNT, Maandy, Boutross and Jovie Jovv.

Expect more bangers from the Buruklyn Boyz, who despite being practically fresh out of high school are doing it with the best of them.

As they’ll take every opportunity to remind you with their Kwani ni Kesho tag, Buruklyn Boyz aren’t waiting for tomorrow to take over.