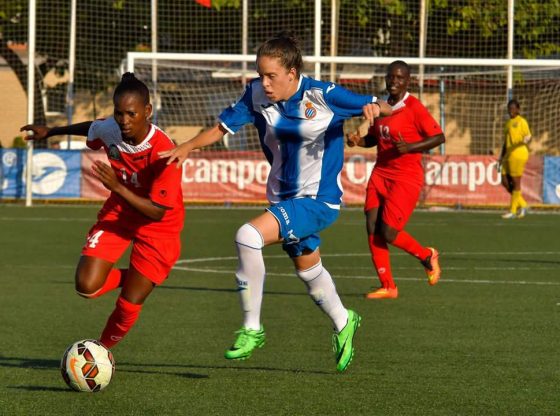 Harambee Starlets forward Esse Akida is set to join Greek giants FC PAOK Thessaloniki after penning a deal with the side.

It marks a return to European football for Akida, who in February 2020 joined Turkish heavyweights Besiktas from Israel’s Ramat HaSharon FC. At Ramat HaSharon, she had bagged 4 goals and 5 assists in 19 appearances mostly as a fullback during the 2018-19 season.

The Covid-19 pandemic, however, threw Akida’s plans into disarray as the Turkish championship was suspended. A year after signing for Besiktas, Akida came back home to sign for KWPL side Thika Queens on a short-term deal and helped them lift the title in the 2020-2021 season.

The pandemic made it impossible for Akida to achieve her dream of becoming the first Kenyan to play in the UEFA Womens Champions League. But she now has her eyes set on achieving that objective with FC PAOK.

“I am incredibly excited to become a member of PAOK’s women’s team. I had heard about the team when I was playing in Turkey. My dream is to play in the Champions League and I believe I will make it happen here.

“I come to one of the biggest clubs on the planet. PAOK is known in the world of football and I believe that we can achieve great things as a team. I will make the dream of the Champions League come true with the Club. I know there are big names in the event but nothing is impossible. We can shock some teams,” Akida stated after she was unveiled by the club.

Announcing her signing on their website, PAOK highlighted Akida’s record as one of Kenya’s top strikers.

“She is an integral part and top scorer in the history of the Kenyan national team and has 33 appearances with the Starlets managing 15 goals and nine assists.

“In 2016 she won the Golden Boot at the COTIF Women’s Tournament and the Golden Boot Shoe at the Cecafa Women’s Championship. Finally, she scored the historic, first goal of Kenya in the [Africa Women’s Cup] in 2016, against Ghana,” the statement read in part.

The club noted that while Akida was a centre-forward, she could play in other positions including on the wing.

On her part, Akida noted that she looked forward to settling in and getting down to business for the 2021-22 season, stating that she didn’t expect the language barrier to pose too much of a challenge.

“I like the football culture that PAOK stands for, it is something we watch and read about often. I know that my adaptation will not be difficult because we all speak the language of football. My only goals are to help the team achieve its goals,” she noted.