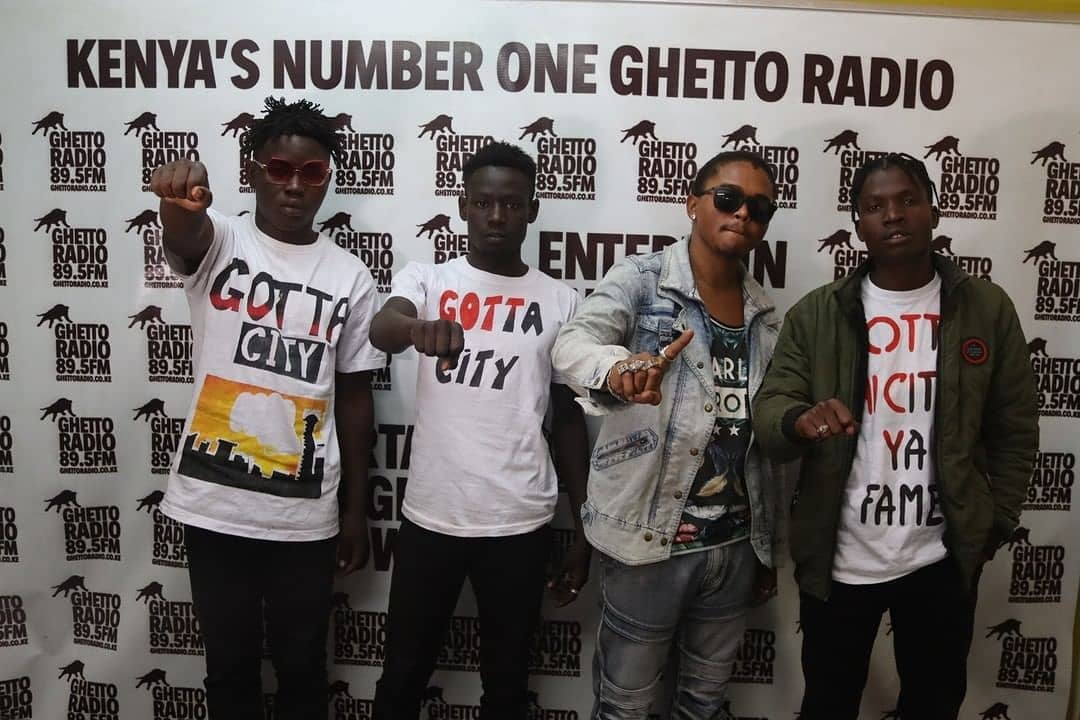 Gotta City is a neighborhood in Nairobi’s Embakasi East Constituency.

It sits between Donholm estate and Tassia Estate.

The name Gotta City is the creation of Madocho wa Kanairo, a Sheng’ wordsmith and tattoo artist who went viral setting him up for a career in music and entertainment.

Gotta City is also an artist collective that emerged in November 2020. It is made up of four artist members; Madocho wa Kanairo, Stoopid Boy (Real name Edward Waititu), Liyetin and Pingo.

The group has so far released two singles and music videos; Ngumi ni Jamo and Monchoka.

Gotta City shot to fame largely thanks to their beef with hardcore Gengetone group Mbogi Genje.

Mbogi Genje, made up of Smady Tingz, Guzman and Militan, hails from Umoja in Nairobi. The group has had a slew of hits since 2019, establishing themselves among the biggest artists in the country.

One youth, Fathela, claimed that he had previously worked security for Guzman.

He accused Mbogi Genje of shooting videos in Gotta City without helping out youth in the area.

Fathela further claimed that Guzman was robbed in Gotta City and it was youth from the area who accompanied him to a police station to file a report.

Guzman later insulted Mungai Eve in the Instagram DMs as he responded to the interview, tearing into the interviewer and telling her to leave Mbogi Genje alone.

With this escalating the beef, Eve returned to Gotta City where interviews with Stoopid Boy and Madocho went viral.

Stoopid Boy, a rapper, accused Smady Tingz of stealing his flow and lyrics. He further claimed that Guzman did not write his own lyrics.

Videos surfaced of old freestyles proving that Stoopid had interacted with Mbogi Genje in the past.

He maintained that the artists were supposed to be role models to youth in society.

Madocho is a tatoo artist based in Nairobi. He was born to a mother from the Luo community and an Italian father who passed away.

He also tore into Instagram users who backed Mbogi Genje in the beef.

Liyetin had freestyled alongside Stoopid Boy in one of the interviews and quickly caught fans’ attention with his lethal trap flows.

Pingo is also a rapper who was a friend of the rest of the artists. He noted that he had no beef with the group but expected them to support youth in the ghetto.

As they went viral and the beef escalated, Afro-Royalty Records moved quickly to work with the artists.

Gotta City released their first single, Ngumi ni Jamo (one fist), at the height of the beef with Mbogi Genje.

Stoopid Boy insisted that it was meant to encourage youth to desist from crime, which he accused Mbogi Genje of supporting.

Here, Madocho delivers the chorus which features a refrain of his popular phrase.

While their venture into music might have started out as beef, we have a feeling you’ll be listening to Gotta City for a long time.