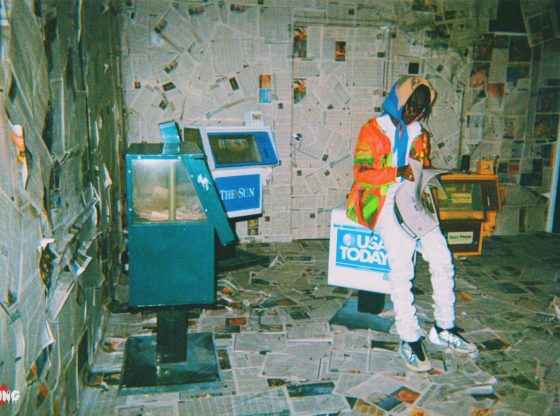 Among the additions to the tracklist was Keep Me Alive Pt. 2 featuring KayCyy Pluto and the Andre 3000 collab, Life of the Party. KayCyy already had writing credits on three songs on the original Donda album – Hurricane, 24 and Praise God.

KayCyy (real name Mark Mbogo) was born in Kenya and moved to Minnesota in the United States with his family at the age of 9.

“Reason being why we came here, it’s just like for any immigrant or anybody that tries to come to America, for like, the American dream,” he told Minnesota TV station Kare 11.

KayCyy states that he fell in love with music in the church as a kid in Kenya, and later began experimenting with free trials of music production softwares. He gained a buzz on SoundCloud while still in high school at St. Paul, thanks to songs such as Here.

As he has revealed in past interviews, he ran off to New York after high school with dreams of furthering his music career – leaving his Kenyan parents worried.

“Both my parents didn’t feel great about it at first,” he said. “Being my parents are African, it’s probably even more strict so it’s like they didn’t want to. You know what I’m saying? It’s all about school.”

He was signed early by ATM/Alive Productions, which was founded by Reefa, who originally played drums for Destiny’s Child. Aside from Ye, KayCyy has worked with the likes of Travis Scott, Justin Bieber, Lil Wayne and Lil Baby.

He met Kanye through his manager, Akon’s brother Bu Thiam, who also happens to be Ye’s manager.

“When I met him that day all I did was probably play him one song and it was on my phone,” Pluto revealed of his first meeting with Ye.

He’s learned a lot working on Donda with Ye too.

“The word I would just say is an experience…He has his hands in like the clothes and like just everything. Agriculture. He’s trying to do a whole bunch of stuff, like, let me build a city here. Let me build some stuff in Wyoming. Let me run for president and actually do it. So it’s kind of like … that’s what I kind of learn from him,” he stated.

And KayCyy is only getting started. He is working on a highly anticipated album, Who is KayCyy.