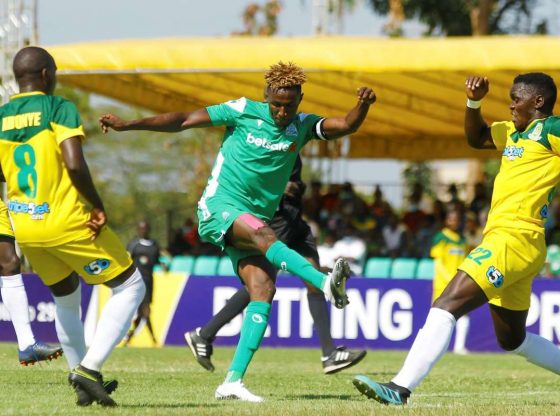 Gor Mahia and Harambee Stars playmaker Kenneth Muguna is set for a switch from the Betking Kenya Premier League (FKFPL) to the Tanzanian Premier League ahead of the 2021/22 season.

Muguna has signed a pre-contract with deep-pocketed Azam FC, which is going all out in its bid to overtake Tanzania’s traditional giants, Simba and Yanga next season. Azam currently sits third on the log behind the two.

Several teams had reportedly been interested in the midfielder’s signature including both Simba and Yanga, DRC’s Motema Pembe and South Africa’s Orlando Pirates after it became apparent that he would not be renewing his contract at K’Ogalo.

Azam FC’s Communications Director Zaka Zakazi further confirmed that the club had paid a Ksh1.72 million fine handed down to Muguna by the Confederation of African Football (CAF) in May.

Muguna and his Gor Mahia team-mate Boniface Oluoch had each been fined Ksh1.72 million for an incident that took place in February during their CAF Confederations Cup match away to Zambia’s Napsa Stars.

They were accused of attacking a match official after the full-time whistle was blown. Gor Mahia had been set to qualify for the Confederations Cup group stages before the referee Lebalang Mokete from Lesotho gave Napsa Stars a last-minute penalty that saw them sail through.

Muguna has been in fine form lately, and was named player of the tournament in the recently concluded FKF Betway Cup, in which Gor Mahia beat archrivals AFC Leopards in the final to secure continental football for next season, in the Confederations Cup.

The midfielder’s elegant passing and silky smooth style both for Gor Mahia and the national team have caught the eye of many in the last few years, with a move from the KPL having long been viewed as inevitable for the talent.