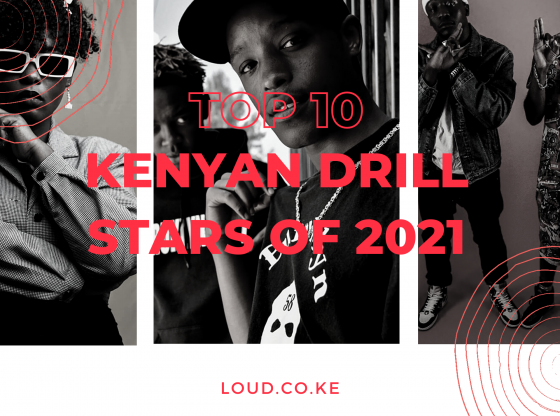 Kenya is fast becoming the most important destination for African Drill music. 2021 is the year that Drill properly blew up in Kenya, creating a mainstream lane for itself alongside other urban genres including Gengetone, RnB and Afro-pop.

Importantly, it also brought to the center-stage tonnes of talented and previously under-appreciated artists. For example – Buruklyn Boyz had been buzzing in Nairobi Shrap circles with Durag na Slice before their hit Drill single Nairobi became their ticket to the mainstream. Wakadinali had been one of the hottest acts on the underground Nairobi rap circuit for years, but it took their first full Drill album – Victims of Madness, to establish themselves as bona-fide mainstream stars.

While several artists across genres have been experimenting with Drill sounds, there remains a number of dedicated Kenyan artists building up fanbases with their authentic African drill.

Buruklyn Boyz have in recent times become one of the defining faces of Kenyan drill music. The group is made up of rappers Ajay and Mr. Right.

While they first stirred some buzz with early Shrap singles including Durag na Slice, it was their forays into drill that saw Buruklyn Boyz cut a niche for themselves – with releases including Psycho and Billy Jean.

The release of Nairobi in late 2020 changed the game for Buruklyn Boyz and became their biggest hit yet, garnerning local and international attention. They’ve since followed it up with a slew of hit singles including Wild, Piga Lean and Dream ya Kutoka Kwa Block – their run looks set to continue for a long time.

Wakadinali – made up of Scar Mkadinali, Domani Munga and Sewer Sydaa – are among Kenya’s biggest rap stars with at least four full-length projects under their belt including Ndani ya Cockpit 1 and 2.

It was their 2020 Drill album Victims of Madness, however, that saw them unlock a new level of success thanks to hardcore bangers fusing Sheng’ flows, Eastlands stories and lyrical prowess on some Drill beats – such as Morio Anzenza, Extra Pressure and XXXL.

Although they’ve proved their versatility on several occassions, Drill has definitely become Wakadinali’s lane and they’ve made it their own, establishing themselves firmly on the list of Kenya’s top Drill stars.

Natty is part of the GTA crew and one of the fastest-rising Drill artists in Kenya. He has been racking up Drill hits including Rong and Peptang.

Unlike several artists riding the Drill wave with one eye on its growing popularity, Natty has been one of the most consistent and dedicated Drillers on the scene.

His GTA crew has built up a solid fanbase, and definitely have a place among the defining faces of Nairobi Drill.

Maandy is a sensational and versatile rapper who is also fast becoming one of Kenya’s top Drill artists. The Shash na Lipgloss and Sicheki hit-maker has no problem when it comes to bars, and her star looks set to shine even brighter.

Mandy has been putting in the work in the studio and has several hit singles and big-name features.

Most recently, she linked up with Ndovu Kuu and Fena Gitu for the highly anticipated remix of her party single Sirudi Home.

Dyana Cods is affiliated with Rong Rende and Wakadinali, but is one of Kenya’s buzzing Drill artists in her own right. She first caught the attention of many Kenyan fans with her legendary Trap Lab Freetyle on Homeboyz Radio and her verse on Wakadinali’s Morio Anzenza.

Since then, she has put out several bangers and is finding her sound in Drill. This year, she has had some of the biggest Kenyan Drill tracks including the Sewer Sydaa-assisted Riswa.

Her raw, unapologetic raps matched with Drill beats and Rong Rende back-up makes for an incredible combination, and she looks set to be a feature of the Nairobi drill scene for a while.

While versatility and switching genres are nothing new to Denzel Kong, it is his Drill bangers that have made him one of the most exciting artists of the Kenyan music scene in 2021.

His unique voice coupled with steely flows and bars have caught the attention of fans on hits including Cheki and Kitu Nono.

And while he’s sure to give you all sorts of different sounds, it’s safe to say that you can expect some more Kenyan Drill hits from Denzel Kong.

Mando is also affiliated with the GTA crew and is one of Nairobi’s popping Drill artists.

His biggest releases so far include GTA, KingKong and the Natty-assisted Charged Up. He’s been able to establish himself as one of Kenya’s bona-fide drillers by mashing up fire Eastland flows and Drill beats, and is one of the key stars of the GTA line-up.

Olezz Family are among artists whose Kenyan Drill sounds have made them some of the rappers to watch in the 254.

The group has found traction with a series of consistent Drill releases, including the buzzing single Mandem, and No Face No Case featuring Buruklyn Boyz. Mandem features Lorenzo, Shawn Marley and Odimwah.

NastyGoat is another of the fast-rising artists shaping the Kenyan Drill scene.

Several of his recent Drill singles have gained traction and caught the eye of many fans, including Toyota and Aim or Shoot.

The flows and vibes on NastyGoat’s bangers are Kenyan drill at its finest.

Geri Soweto only just shot onto the scene, but they are already making their mark. Their most recent single Posessed has been one of the top Kenyan Drill tracks of 2021.

More recently, their freestyle on YouTube channel Kipawa had many fans declaring them as the hottest new artists in Kenyan Drill.

As long as they keep putting out bangers, Geri Soweto are well on their way to becoming some of Kenya’s biggest Drill artists.