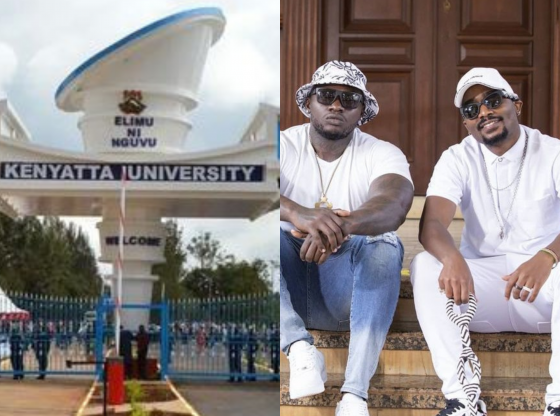 When you’re the Marketing boss at Kenyatta University, hearing the institution slandered on the biggest song in the country might be a tad bit annoying – or so it appears.

Barely a day after smash hit ‘Ndovu Kuu‘ by Krispah (Ndovu Kuu) featuring Khaligraph Jones and Boutross Munene was pulled down from YouTube after it had racked over 3.5 million views, leaving fans confused, Krispah has come out to reveal the behind-the scenes intrigues he believes led to the situation.

First things first, just in case you live under a rock somewhere. One of the most quoted lyrics from Ndovu Kuu has been a bar in which Krispah talks about KU – an acronym commonly used in Kenyan parlance in reference to Kenyatta University. Although, as Krispah notes, K.U could mean anything from Kabianga University to Kukula Ugali.

The lyrics loosely translate to: “…If my kid is called to KU I won’t accept it, there’s no education at KU I can’t accept it, You’ll take them for First Year introduction, two weeks later they’ll already know reproduction…”

As the rapper revealed, he was contacted by one Machua Koinange, who identified himself as the Communications Director at Kenyatta University soon after the song began gaining traction online and on the airwaves.

He stated that Koinange reached out to air his concerns over what he considered the detrimental impact of Ndovu Kuu’s lyrics on the university’s image. Krispah went on to disclose that, as a form of mitigation for the bad publicity, he was asked to perform at the university’s graduation ceremony and collaborate with a group of students on a song.

The rapper’s team then sent a proposal to Koinange in which they laid out their terms – including a total fee of Ksh950,000 for the performance and feature. It was at this point that everything seemingly went south, with the university official vehemently rejecting the proposal and maintaining their stance that the institution was a victim of defamation. The rapper backed his claims with screenshots of email correspondence between him and Koinange.

“As I explained, your song that has been playing on the airwaves and on social media has lyrics that defame KU and states inter alia that “Hakuna Masomo KU”. As I explained, your story was a personal experience, the lyrics damage the reputation of the institution and discourage parents from sending their children here.

” In addition, you have financially benefitted from the lyrics of the song whose major take-away on social media has been that there is no education going on in KU. I reached out to you as an artist and requested that you conduct a CSR to mitigate the negative impact of the song to our reputation,” Koinange’s email read in part.

The rapper claims that what followed next was a copyright claim filed against the song on Youtube by an upcoming artist only known as Dexter, who in a phone conversation with Ndovu Kuu’s management is heard stating that he is an ambassador of the university.

He claimed to have filed the copyright claim because of the lyrics on KU as well as the use of his sounds, although Krispah maintains that he developed the beats and lyrics from scratch and accuses his detractors of exploiting YouTube tools to pull him down.

The stage is now set for a legal battle, after Krispah’s management informed Dexter that their lawyers would be in touch.

Meanwhile, Krispah wants Ndovu Kuu back on YouTube, asserting that artists invest in their craft and deserve respect.

Watch him explain the situation: