Mbuzi Gang: How Trio Took Over Gengetone and the Charts 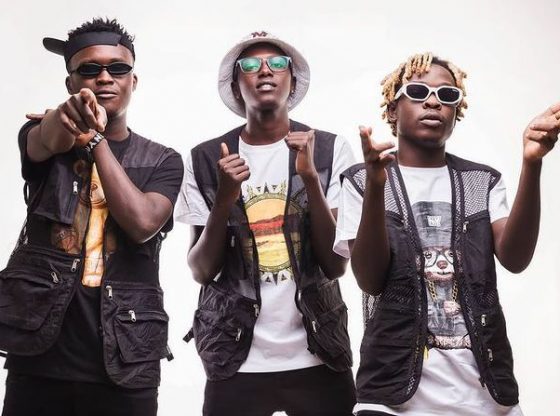 Joefes, iPhoolish and Fathermoh. This group has become the de-facto new face of Gengetone in 2021, redefining the genre that has dominated charts in Kenya since 2018.

Mbuzi Gang is building on the success of pioneering Gengetone groups such as Ethic Entertainment and Ochungulo Family. They’re taking it a notch further with the type of cross-over hits you wouldn’t be too surprised to find your parents listening to.

Undoubtedly, Shamra Shamra is the biggest of the lot. The Mejja-assisted single catapulted Mbuzi Gang to new heights and has been among Kenya’s biggest hits of the year.

You might have tried and failed to sing along to the catchy hook by Fathermoh, ‘Kisham sham Kinyam kitam tam kisham kinyam shamra shamra kelele na nderemo’… or something along those lines.

Fathermoh is an accounting student and was the last member to join the group. As Joefes and iPhoolish admit, his hooks are what the group needed to unlock the next level. He was the missing piece of the jigsaw puzzle.

The group is signed to Black Market Records (BMR), a label that has gone all in on the Gengetone wave since the genre began taking over the streets and re-igniting a love for Kenyan music.

Joefes (real name Joseph) was the first to be signed to the label. At the time, he was an artist and student at Pwani University studying Marine Biology.

iPhoolish was a close friend of his, and was also a Pwani University student pursuing Linguistics.

Joefes was the first to get on BMR’s radar and was signed as a solo artist as he started gaining some buzz in 2019. For one of his first projects on the label, he featured iPhoolish.

The verse by iPhoolish caught the attention of BMR’s CEO who decided to sign him as well. The two never completed their studies at Pwani University.

Fathermoh had been on the sidelines, and was only just getting into making music. Taking to Instagram in 2019, he reached out to Joefes whose music he enjoyed seeking to work together.

It took almost two years, but Fathermoh eventually linked up with iPhoolish and Joefes to create Mbuzi Gang.

Since then, they’ve been making a lot of noise on Kenya’s urban music scene.

Many fans took notice of Mbuzi Gang for the first time when they put out Wagithomo featuring SWAT, Ssaru, Exray and Dullah. It was an instant hit – Fathermoh’s now trademark witty hooks, bars by Joefes and appearances from Gengetone stars SWAT, Exray, Ssaru and Dullah.

Wagithomo set the stage for the mega-hit that would follow – Shamra Shamra. Mbuzi Gang first reached out to Mejja with the unfinished song including their vocals, and the Genge legend absolutely loved it.

Shamra Shamra is produced by Kashkeed. The song, along with the music video released in December 2020 became a true East African hit banging in clubs from Kampala to Dar Es Salaam.

Shamra Shamra also established Mbuzi Gang as bona-fide stars. Their run continued after the single as they released Sherehe Sheria with Jovial.

Along the way, they also collaborated with a handful of artists including their Black Market label-mates Rico Gang. They’re also taking their sound beyond Kenya’s borders collaborating with Ugandan Fik Fameica, perhaps an attempt to make the most of Shamra Shamra‘s East African success.

Their appearance on the new Genge la Bundoksi EP by Boondocks Gang (also signed to BMR) might also turn out to be the another smash hit for 2021. The buzzing single was Loud.co.ke‘s standout track from the project and screams club banger smash hit.

Fans (mostly just us at Loud.co.ke) have been impatiently waiting on official visuals for the single from the BMR artists.

All things considered, Mbuzi Gang aren’t playing around when it comes to making a lane for themselves as stars of Kenyan urban music and look set to become some of the biggest names in the game.