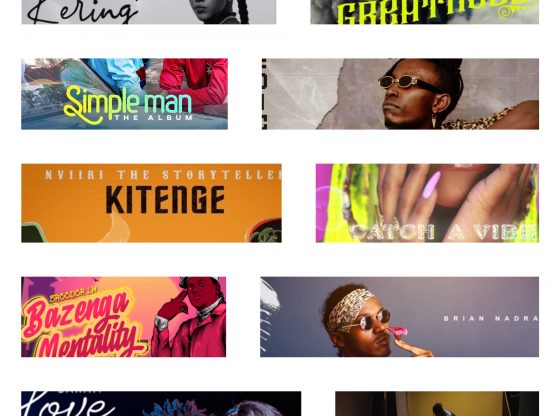 In spite of—or perhaps because of—everything, 2021 has been the year of the album. Amongst all the difficulties of this year, most of us were freshly blessed with chunks of time: to sit, think, and listen. And the artists delivered, with thematic resonance projects that soothe anger, pain, and loneliness. Some assisted us in finding joy by providing opportunities for celebration, creativity, and sensuality. Whether they have been released before or after the world changed, the albums that stayed with us—from Afrobeat projects to nihilistic fantasies to the long-awaited return of a beloved Kenyan trio—made their mark as worlds into which we could fade away when we actually required it the most. Below, the 10 albums we’ve loved living within 2021.

The title of this project is very fitting, as it brings a fantastic blend of alternative Hip Hop skills and themes relevant to surviving in Nairobi. From the opening track to the last, this project will have you fully engaged with Kahu$h as he digresses you into a relaxed state with his vocals and bars on each track.

Kahu$h alludes to the struggle and focuses on the grind. The title says it all, persisting and not giving up despite trolls and naysayers. He confirms this explaining literally where he was during the pandemic. The album doesn’t come as too serious or too heavily themed either, just an honest piece and expressive of how he was feeling.

Arriving seven years into Femi One’s career, her debut album Greatness excels as a multifaceted, exhilarating, and inspiring body of hip hop. It is bold and filled with a wild dose of personality and style. Anyone bored of overused rap beats with rattling hi-hats, piercing snares, and rumbling 808s should be refreshed by what Femi One has been able to accomplish on Greatness.

Successful collaborations strew the 14-track record with artists from Kenya, Tanzania, Uganda, and Zambia. If she has chosen to name her album this way, it is primarily to set the record straight. Greatness carries her signature punchlines, locally comedic nuances, thought-provoking rawness, and the Sheng’ (slang) street language

Love like This album is centered on its title, an art piece for the lovebirds. Its lyrics are for the hopeless romantics with plenty of declarations of love. The mood of the album is groovy and melancholic with a slow tempo setting the tone for a romantic music experience.

Featuring East Africa’s finest talents in Tanzania’s Rayvanny (BET Award Winner), Kenya’s Nadia Mukami Burundi’s Sat-B, and Uganda’s Lydia Jazmine. The album is a true representation of the East Side love story. Kiss and Pete Yangu both records on romance and engagement respectively are monster hits standout tracks from the album and set the bar for new age singers from Africa on how to do a love concept album.

Nadrenaline is Nadra’s debut album which alludes to his persona and style serving his fans a buffet of genres. In the album, he sings Kikuyu Vernacular, Sheng Slang, Swahili, and even Lingala. The album is well invested in the sound quality, mastering, mixing; generally world-class quality by the legendary Eric Musyoka.

Thematically the album is a feel-good experience covering an array of topics including love and relationships, pop culture the entertainment scene a perfect party playlist. The album has eight tracks and an all-around feel of urban pop music. It’s music for an urban generation of the smartphone era centered on millennial culture. The lyrics are top-notch and the versatility is unmatched by anyone in the Kenyan music industry.

The Nairobi singer had earlier promised his fans a new EP via his socials. All the songs in this EP are love songs delivered in Bensoul’s classic easy and soulful style. There is no doubt that Medicine hosts some of the best love song dedications. Everyone is looking for a cure. The cure comes in so many forms. Some find it in science, some find it in religion, some in music others in love. The cure lies within. This is his cure.

The Lucy hitmaker clearly went out of his way to flaunt his songwriting and vocal prowess in these songs. While the EP has no collaborations, its production was a collaborative effort of Bensoul and producers Victor Mbogo and Fancy Fingers and instrumentalists Mutoriah, Yvan Khwisera, and Tim Reynolds. Bensoul has indeed cured the world with new ‘medicine’, his much anticipated acoustic EP.

Bazenga Mentality is a moment of glory basking for the rapper compared to his debut it is a statement of intent, a public service announcement telling fans and haters alike he has arrived. The album has a trap/hiphop feeling with laid-back songs that are groovy and smooth however the bars have been hard. Covering a wide range of themes from the grind and hustle, love, sex, and relationships to his school frustration setting scenarios, with a notable improvement in quality compared to his debut.

The sophomore alludes to it with the sizzling hot femcee Ssaru feature on Bei Imepanda. The lyrics are razor-sharp with rare misses despite the mainstream success the bars are really hardcore thus leaving no room for error. The project is heavy packed with plenty of hits, staying true to his Bazenga status a few tracks stand out including Drop Zone featuring the talented Domani Munga (Wakadinali).

The title of this EP is very fitting for the project as it brings a fantastic blend of alternative R&B and Afro beats to sound all onto one project so you can do exactly what the project is telling you to do. From the opening track to the last, this project will have you fully engaged with Karun as she lulls you into a relaxed state with her vocals on each track. Karun even said this herself when asked where she was at when she was creating the project

“The title says it all, catching a vibe. That’s literally where I was. I didn’t want it to be too serious or too heavily themed either. I just wanted it to be honest and that’s how I was feeling”. Along with Karun’s incredible talent on this EP, there are a range of features including Mpho Sebina, Kahu$h, Chase Aaron, and Xenia Manasseh – all incredibly talented in their own right as well. The 7-track EP also boasts production from the likes of Le Mav, Higo, and MOMBRU.

The tape is a collaborative effort recorded with various artists. The soundtrack of our lives from the album is a story about love, resilience, following your dreams and life, the never-ending journey. Six Tracks each specifically produced to carry you through each day of the week. Contemporary Kenyan music criticism takes the shape of lamentations about a shift of narrative focus of traditional values to the glorification of sex and materialism: a switch in emphasis from storytelling to catchphrase-driven compositions falling short of discernible messages.

Although most current Kenyan popular music falls in the latter category, with a bit of extra digging one would discover that substance isn’t necessarily lacking but somewhat overlooked. It’s why H_art the Band’s third album Simple Man is arguably the best Kenyan pop album of the year so far.

In the span of six tracks, Nviiri the Storyteller explores what it means to love someone. Released on March 5th, ‘Kitenge,’ details the love story of a couple that is fated to fail, as predicted in the Tarot cards on the EP’s album art. While the relationship is doomed, ‘Kitenge’ is far from a disappointment. The melodies, the production, and vocals are everything and more that you have come to expect from artists on the label helmed by Sauti Sol.

The EP’s journey is structured to resemble the path that some relationships take, albeit with a slight detour at ‘Birthday Song. On the opening track, ‘Baridi’, Nviiri partners with the queen of sultry and seductive music, Sanaipei Tande, to convey the desire and lustful feelings that sometimes mark the beginning of relationships. If this EP was a student’s dissertation, the title-track, and third song, ‘Kitenge’ would be the thesis statement.

1. A Side of Me, Nikita Kering

Nikita Kering’s debut 7 track ‘A Side of Me’ EP is a masterpiece, a compilation of what you’ve seen/heard & what you haven’t. She bridges relatable situations and experiences of other people’s stories, creatively coming up with a body of work that people could identify with. The EP is a work of art that clearly showcases her artistic vibe & energy. She released new visuals to tracks, “Ex” and “Crossing Lines” off the EP.

The ballads take you through Nikita’s growth in the industry. The tape is entirely produced and sound engineered by the legendary So Fresh. Her powerful vocals paired with her phenomenal songwriting skills are out of this world! At 19, her musical journey is incredible to watch as she takes the music world by storm.