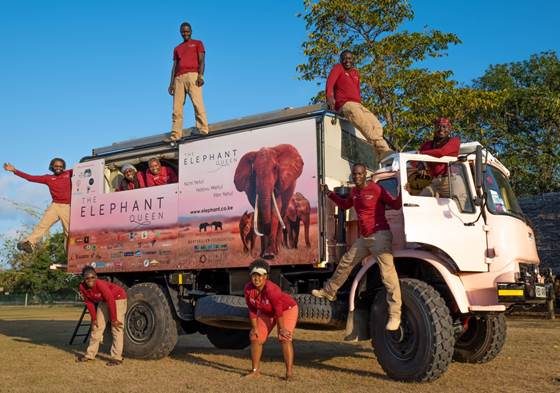 An ambitious and intensive Mobile Cinema and Outreach Programme will start a nationwide journey in Mombasa on Friday, carrying the acclaimed film ‘The Elephant Queen’ to far flung corners of the country, with the objective of using it to inspire Kenyans of all ages towards an appreciation and understanding of elephants and the environment.

This family-friendly multi-award winning Kenyan feature documentary, filmed in the greater Tsavo-Amboseli ecosystem, tells a stirring and intimate story of the most majestic and sentient animals in Africa, and stars the ultimate leading lady – Athena – an elephant matriarch who will do everything in her power to protect her family when they are forced to leave their waterhole.

The film, which celebrates Kenya’s extraordinary wildlife and biodiversity has won, amongst many accolades, the Cinema for Peace Award, the UN World Wildlife Day Biodiversity Award and Best Cinematography at DOC NYC.

What the filmmakers observed – the poaching for ivory, the increasing human-wildlife conflict and the loss of elephant rangelands, convinced them that more needed to be done – and so ‘The Elephant Queen Outreach Program’ was born, with the objective of using the film and associated resources to inspire and unite Kenyan youth towards an understanding and appreciation of elephants, and the wild spaces that they and the biodiversity they support, need to exist.

With the support of BESTSELLER® Foundation, in collaboration with the Kenyan Institute of Curriculum Development (KICD) and under the leadership of Victoria Stone and Etienne Oliff, a creative team of writers, literacy specialists, illustrators, colourists, educationalists, playwrights, consultants and theatre specialists was recruited from across Kenya and abroad, and over a period of three years a dynamic toolbox of conservation education resources, all based on the film, was created.

This remarkable ‘must-see’ set of materials includes a series of 28 literacy-based learn-to-read books based on the film’s wildlife characters and themes, short elephant videos, children activity packs, coloring-in books, podcasts from the making of the film, inspirational theatre toolboxes for children of different ages and fascinating interviews with leading Kenyan elephant experts, all designed to inspire young Kenyans towards careers in wildlife conservation and the natural sciences.

In each resource, authentic natural history is woven into engaging stories and narratives, all of which may, with time, inspire a new generation of Kenyan conservation leaders.

Housed on the program’s website, www.elephant.co.ke, all these resources are available free-of-charge in East Africa.

This is not the end of the story, for the directors and their partners recognized that it was critically important that the film, ‘The Elephant Queen’, which was filmed entirely in Kenya, be seen by Kenyan youth, and in particular those living alongside the country’s protected areas with the reality of increasing human-wildlife conflict.

With the ongoing support of BESTSELLER® Foundation and joined by Save the Elephants and Kivukoni International School, the concept of a ‘Mobile Cinema’ was developed, specifically to show the film across the country, in English, Kiswahili & Maa.

With the enormity of the venture and the importance of its impact, a dynamic team of Kenya engagement  & facilitations specialists  was carefully recruited (https://elephant.co.ke/mobile-cinema ) and over two months, immersed into wildlife and trained in the use and dissemination of the film and associated Elephant Queen outreach materials.

The team left their base at Kivukoni International School to begin their nation-wide journey, travelling aboard a customized, self-contained 4×4 Bedford lorry and carrying super-sized solar-powered Airscreen-cinema equipment (www.airscreen.com)

Their objective is to follow a strategic pre-determined GIS-based route designed in association with Vulcan Earthranger (www.earthranger.com) and in collaboration with governmental and conservation and civic organizations across the country to screen the film and engage hundreds of schools and communities around national parks and protected areas including Shimba Hills, Tsavo East&West, Chyulu Hills, Amboseli, Maasai Mara, Laikipia, Samburu, the Ndoto Mountains and the Turkana Basin.

It is likely that this pioneering initiative will serve as a prototype for film-based mobile conservation education programmes that are replicable and scalable to other parts of Kenya and neighbouring countries. The Elephant Queen Outreach team will make all information open-source, allowing other groups to benefit from the years or research that has gone into planning The Elephant Queen Mobile Cinema.

The film has already inspired and unified millions of people around the world towards a greater understanding and appreciation of Elephants and wild-spaces, and raised thousands of dollars for wildlife education.

The goal is now to do the same in Kenya and by bringing the film home to where it was made, inspire and nurture an appreciation and understanding of our country’s extraordinary natural heritage.