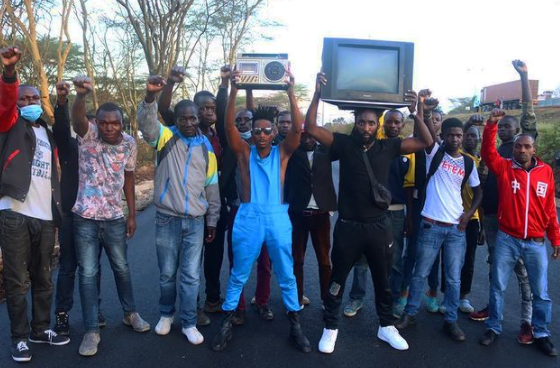 Comedian Eric Omondi on Tuesday, November 16 made good his promise to storm Parliament in protest, as he demanded that Kenyan TV and radio stations play 75% Kenyan content.

He was arrested and engaged officers in a tussle, even jumping on top of a Police Land Cruiser. The video quickly went viral.

Kenyan creators have for years demanded that mainstream media prioritize Kenyan music, movies and content in general as opposed to the norm – which has seen the spotlight primarily on music from foreign markets including Nigeria, Tanzania and South Africa.

Omondi is taking it a notch further. He is inviting creators and Kenyans to join him at Parliament buildings in Nairobi every Tuesday to demand legislation to ensure broadcasters play 75% Kenyan.

His criticism of Kenyan music and the industry had put him on a collision course with artists including Bien-Aime Baraza of Sauti Sol and Femi One.

Eric had put radio and TV personalities including Jalang’o, Kamene Goro, Maina Kageni and Gidi – insisting that they needed to play Kenyan music. He also called out other stakeholders including DJs and the government.

“As I mentioned EARLIER What ails the Kenyan Music industry is a myriad of things that are INTERCONNECTED. There is an entire ECOSYSTEM that has COMPLETELY FAILED and COLLAPSED!!! And in Order to FIX the FAILED industry we must FIX the ENTIRE ECOSYSTEM. I WILL FIX IT!!! MARK MY WORDS!!! There are a couple of PLAYERS that must be FIXED before we ACHIEVE ANYTHING. Here is the FAILED ECOSYSTEM.

I Want Us to take a MOMENT and talk about RADIO HOSTS. Radio Presenters have PLAYED the BIGGEST ROLE in KILLING the INDUSTRY. They are MURDERERS!!! They only Come 2nd to the LAZY MUSICIANS. Radio Presenters have HYPNOTIZED and BRAINWASHED Kenyans into BELIEVING that NIGERIAN (AFROBEAT) TANZANIAN (BONGO) and SOUTH AFRICAN (Amapiano)ARTISTS ARE BETTER!!! Just take a Few MINUTES and Listen to any LOCAL RADIO STATION and you will get my POINT. THEY LITERALLY PLAY 95 PERCENT FOREIGN and 5 PERCENT KENYAN. But that is about to CHANGE. Once we PASS the LAW after TOMORROW. We Will RAID and EJACULATE all PRESENTERS who will not adhere to the PLAY 75% LOCAL RULE. @Jalango, Mwende Macharia,Jeff Koinange, Alex Mwakideu, Maina Kageni, Gidi and Ghost, Peter Adams, Kamene Goro, Chris 001. YOU ARE OFFICIALLY ON NOTICE!!!!!!!!!!!!!!!”

NAIROBI: Brown Mauzo Album Launch at XS Millionaires
Why Konshens Might Not Perform in Kenya After All