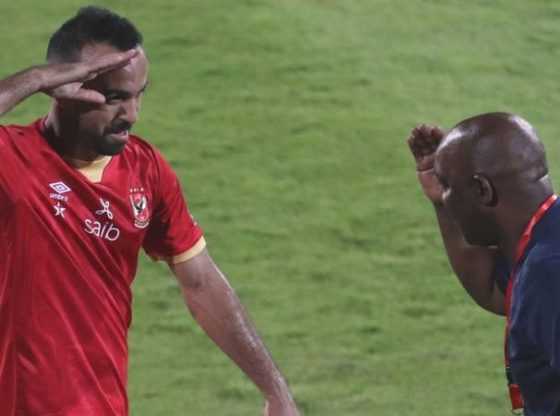 South African coach Pitso Mosimane led the Red Devils in their face-off with the club he supported as a child, Kaizer Chiefs, coached by Stuart Baxter. It was Chiefs’ first ever CAF Champions League final.

A tense first-half finished level, with few clear-cut chances from either side, although Al Ahly regularly patterned up slick football and found their way into the final third.

The game changed entirely in the last minute of stoppage time in the first half, however, when Kaizer Chiefs’ Happy Mashiane made a reckless challenge on Al Ahly right-back Akram Tawfik, clattering into his ankle in the Kaizer Chiefs’ half.

After initially being handed a yellow card, a VAR check saw him sent off.

Photos of a dejected Mashiane walking away and falling on his knees in the dressing room went viral and sparked mixed reactions – although many including Mosimane backed the decision to send him off.

In the second half, there was no stopping Al Ahly who held the numerical advantage.

In-form Mohammed Sheriff opened the scoring in the 53rd minute to take his tally to nine in the last eight.

An elated Mosimane celebrated with his staff and players, and spoke of how important it was for Al Ahly to defend the title. He becomes only the second coach ever to win the CAF Champions league back-to-back, after Manuel Jose in 2005 and 2006.

It was Mosimane’s third time lifting the CAFCL trophy, having previously won it with Mamelodi Sundowns.

Al Ahly is now set to represent the continent at the FIFA Club World Cup, where they will be looking to build on an impressive run during the last tournament in February, when they beat Brazil’s Palmeiras before falling to Bayern Munich in the semi-final.