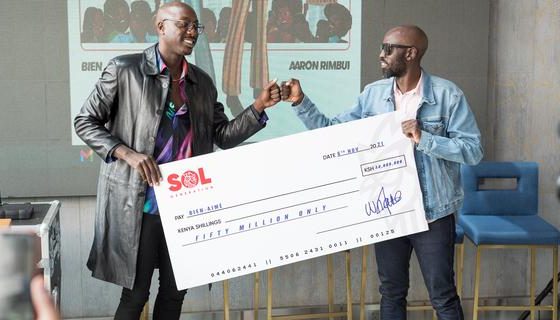 Sauti Sol’s Bien-Aime has officially signed a solo record deal with Sol Generation worth Ksh50 million for a three-year period. He is the first member of the four-man Afro-pop band to sign a solo deal.

The announcement of the record deal left a section of fans confused on the band’s status and Sauti Sol’s association with Sol Generation.

So, what are the facts? Sol Generation is an independent label founded by Sauti Sol, one of the continent’s biggest acts. It’s biggest signees are Nairobi hitmaker Bensoul and Pombe Sigara crooner Nviiri the Storyteller and, now, Bien himself.

Bien’s solo deal with Sol Generation is separate from the deal Sauti Sol are signed to by Universal Music Group (UMG) Africa.

As Loud.co.ke has previously highlighted when highlighting situations such as Ethic Entertainment’s record deals, a group can be signed to one deal and its individual members to other separate deals. Gengetone pioneers Ethic are signed to AI Records in which UMG holds a controlling stake, but its individual members including SWAT and Rekles have signed solo deals with Black Market Records (BMR) and House of Badass respectively.

Sauti Sol, the group, remains signed to UMG and still has one more album to deliver to the major label after 2020’s Midnight Train. As a solo artist, however, Bien will be signed to Sol Generation. He disclosed plans for Sauti Sol’s other three members – Savara, Chimano and Polycarp to ink their solo deals as well.

“All our music including individual singles are on Sauti Sol’s YouTube platform. That is because it is our channel and we built it together. We are brothers.”

“Sauti Sol the entity works under Universal Music Africa in which we have one more album left. The solo projects are under Sol Generation. The contracts are not the same,” he stated.

Bien explained that the shift to solo projects will give fans a chance to delve into the individual artists’ personalities and talents as opposed to the Sauti Sol brand they’ve grown accustomed to. He asserted, however, that Sauti Sol remained intact as a group.

“This was a chance for our fans to get to know us as individuals because most of the time, people are used to seeing Sauti Sol as a quartet. Everyone has his own personality and philosophy.”

“Polycarp is a father, if he sings about the experience of fatherhood, I cannot relate because I am not a parent. I am a bald man, so Chimano does not understand the philosophy of a bald man,” Bien added.