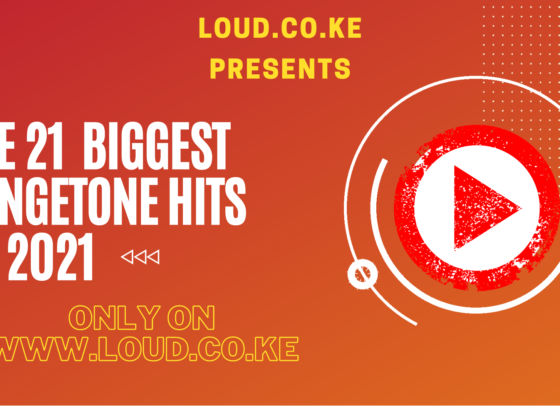 Despite other genres such as Kenyan Drill, RnB and Afro-Pop making a mark in 2021, Gengetone proved that it is going absolutely nowhere. The style’s evolution has been beautiful to watch since its explosion in 2018 led by the likes of Ethic Entertainment, Ochungulo Family and Sailors Gang. Countless new artists have emerged and are redefining the genre, among them Mbuzi Gang, Krispah and Trio Mio. Genge legend Mejja is also going nowhere, having racked up countless solo hits and features in 2021.

Ndovu Kuu is our Gengetone song of the year. The feel-good party tune remains one of the biggest Kenyan tunes of 2021 and you’ll probably be dancing to it at New Years’ events this year. With Ndovu Kuu, Krispah landed his first major hit while incorporating Kenyan hip-hop and shrap stars Khaligraph Jones and Boutross Munene respectively.

Joefes, Fathermoh and iPhoolish make up Mbuzi Gang – one of the groups redefining Gengetone. The Black Market Records (BMR) signees made waves this year with big tunes including Shamra Shamra and Taki Taki. Shamra Shamra, undoubtedly, remains one of the most played Kenyan songs of 2021.

Iyanii landed his break-out hit in 2021 with Pombe, the ultimate drinking song. The catchy Pombe, along with its Above the Head dance, was an instant viral sensation Kenyans fell in love with. You’ll definitely hear it played at a bar near you, if its not on your playlist already.

It’s been an incredible year for Exray Taniua – one third of Boondocks Gang. He’s racked up hits with the group and also come into his own as a solo artist. One of his biggest tunes this year – Sipangwingwi featuring Trio Mio and Ssaru, became a national sensation even being incorporated into campaigns of top politicians as the 2022 polls drawing closer.

Mejja has been on an incredible run since 2020, and in 2021 served up bangers including Tabia za Wakenya – an enjoyable, relatable tune with some of that trademark Mejja humour. The smash hit talks about some of the little-talked aspects of Kenya and its urban culture – or as he reminds you, Kenya si Masaai Mara tu. (Kenya isn’t just the Maasai Mara).

Usherati is another 2021 banger from Exray Taniua. As the title suggests, the chart-topper talks about Nairobians’ randy ways. The song features Mejja and Krispah Ndovu Kuu.

Ala introduced Dantez 254 to the scene in style, although he had been hard at work with a number of singles released before it. The party tune samples Central Organization of Trade Unions (COTU) SG Francis Atwoli’s catchprase. The hook from Rekles made this a sure-fire tune played at every party.

Even as Ethic Entertainment members including Rekles and SWAT Matire signed separate solo record deals, they proved that they can still do it as a unit. The Gengetone godfathers dropped Bazenga, one of the biggest songs of the year, asserting that they still have the genre on lock despite what anyone else is saying.

Giz Giz became an instant classic from Mbogi Genje. The smooth hook by Smady Tings talking about rolling blunts late at night became a relatable tune that took over the streets quickly. Giz Giz became one of the most-played songs of the year.

Mejja makes the most appearances by a single artist on this list, and for good reason. The man has served hits on hits. Among them was Siskii, where Mejja gets in his storytelling bag with a hilarious tale of why he can’t leave a toxic, violent relationship.

Matata have always had a unique approach to Gengetone – complete with choreographed dance routines and stunning videos. They scored a massive hit in 2021 with Chini Chini, yet another hit featuring Mejja aka Okwonkwo.

Maandy has been on the come-up in 2021, and the Shash na Lipgloss hitmaker landed her biggest hit yet with the Sirudi Home Refix. The party banger is a smooth, fresh take on the original banger by Maandy, this time featuring Krispah Ndovu Kuu and Pattern star Breeder LW.

Boondocks Gang this year released their Genge la Bundoksi EP, one of our favorite Kenyan albums of 2021 at Loud.co.ke. Sijazoea Ivo, a lead single from the project, proved to be an instant banger and hit. It features Rekles of Ethic Entertainment and Mbogi Genje’s Guzman.

Since signing a solo deal with Black Market Records (BMR), SWAT of Ethic Entertainment has been hard at work cooking up bangers. This year, he gave us the smash hit Gari Kubwa with no features – just straight up bars and a hook that gets stuck in your head too easily.

Benzema spoke to Loud.co.ke early in the year about being keen on exploring new sounds as a solo artist despite having first shot to fame as part of Ochungulo Family. His Full Vaibu EP featured Pepeta, a massive tune alongside Ethic Entertainment’s Rekles.

Signed to House of Badass as a solo artist, Rekles has also been hard at work and this year featured on several hits. Among them is Zamani, his sponsor-story tune featuring Odi wa Murang’a of Boondocks Gang and Nelly the Goon of Ochungulo Family.

Mejja was yet again in his story-telling bag with Skuhizi ni Kubad, another Genge banger with incredible production behind it. He reflects on various societal issues in his usual comical manner.

Kappy aka the Lyrical Doctor is one of Gengetone’s most underrated stars. This year, he gave us a hit alongside Maddox and Mastar VK with Ng’ang’o Remix – a party banger inspired by a number of different drinks.

Ochungulo Family is still on it, and this year served up hits including Kamua Kamua and Diliti. Diliti featuring Mejja is proving to be a big banger as the year draws to a close.

A late entry into the list, Pattern by Breeder LW featuring Trio Mio is barely three weeks old but is already proving to be a smash hit. You’ll be dancing to this at a club near you!